Anna Mitchell, 30, had thought she would never be a mum again after she tragically lost 4 babies.

However, when her mother passed away, she left Mitchell some money in her will, with which she used to pay for IVF treatment.

Suprisingly, she later found out that she was pregnant with not just one baby, but 3. She gave birth to her triplets in July, and the new family is set to celebrate their first Christmas together. 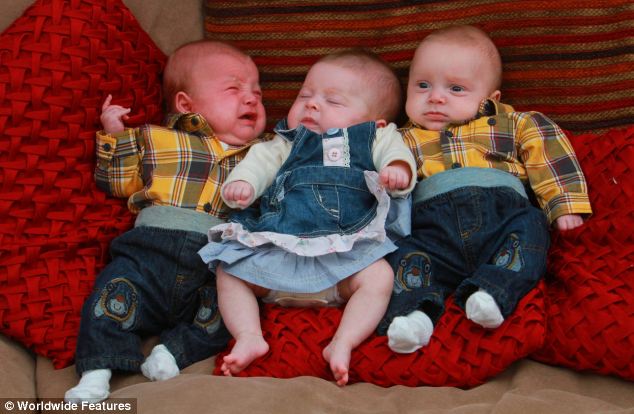 Anna,  from Mansfield, who lives with husband Nick, said: “We haven’t bothered decorating our house for years, as there was just the two of us and no children to fill it. But this Christmas we have three wonderful little reasons to decorate the house from top to toe with baubles, tinsel and lights.

“It’s the first Christmas we have with our three little miracles, Summer, Joseph and Jacob – and we mean to make the most of it. But there is one thing we won’t forget – and that’s mum, who made it all possible.”

The couple had been trying for a baby when Anna’s mum, Nicola, discovered she had liver cancer.

She lost her first baby through an ectopic pregnancy – where the baby develops in the fallopian tube instead of the womb – whilst her mum was in a hospice, before she died.

She lost her second baby, also through an ectopic pregnancy, in summer of 2010, and then lost her third baby in November 2010. She was rushed into the operating theatre after losing her second baby and doctors removed her fallopian tube.

Anna said: “It was life-threatening to me to lose these babies as each time my fallopian tube could have burst. Doctors removed one of my fallopian tubes. It was devastating, it was taking away some of the chance I would have to be a mum.

“After losing my third baby I couldn’t believe it. I had already lost three babies. I was terrified I was never going to be a mum.”

The doctors broke the news to Anna that she would be unlikely ever to fall pregnant naturally. So the couple came to the decision to try IVF treatment, using the money that Anna had been left by her mother.

She said: “I was going to use it to start having IVF treatment. If I couldn’t be a mum naturally, then I needed help. And mum’s money was a perfect gift from her. She knew how much I wanted to be a mum, and now she was giving me the chance.”

The couple had their first course of fertility treatment at CARE fertility in Nottingham, but it didn’t work.

Anna said: “It was devastating, but I knew that we had to keep trying. It’s what mum would have wanted.”

So in April 2012, they tried again for the second time, but again Anna had an ectopic pregnancy – and lost her fourth baby. They decided to have one final go in December 2012, and she fell pregnant.

She said: “I lay on the scanning table hardly daring to breathe. And there it was – a little heartbeat pumping away. I cried with relief. I’d lost four babies, and now here it was, a heartbeat in the right place at last. I felt as though mum was looking down on me and helping me along.”

But at 13 weeks pregnant, the sonographer had amazing news for them – there wasn’t just one baby in there, but three.

She said: “I nearly fell off the table with shock. Then I started crying all over again. I wasn’t just having one baby, I was having three. I’d waited all these years to have a baby, and now three were all coming at once. And it was all thanks to mum, it was her triple gift from heaven for me.”

The babies were born one after the other in July, by caesarian at the Kingsmill Hospital in Mansfield. Summer weighed 3Ib8 and the identical twins Joseph at 3Ib8, and Jacob at 4Ib5.


Anna added: “It will be the most amazing Christmas ever this year, with our three gifts from heaven. I’ve decorated the house from top to toe, and I know that somewhere out there, mum is looking down on us.

“Having three babies has made up for all that heartbreak.  And it’s all thanks to mum and her amazing gift that we are going to have the best Christmas ever.”