Meet the ‘leopard man’ who transformed himself with 1,000 tattooed spots (PHOTOS)

A Texas tattoo artist’s obsession with leopard spots may have caused a rift with his loved ones, but he believes it has brought him one step closer to becoming a true ‘manimal’ with cat-like reflexes.

Born Lance Brieschke, Larry Da Leopard has covered every inch of his body with more than a thousand spots to become half man, half big-cat.

The 40-year-old is a well-known character in Austin, prowling the streets in little more than a loincloth as part of his outrageous leopard act. 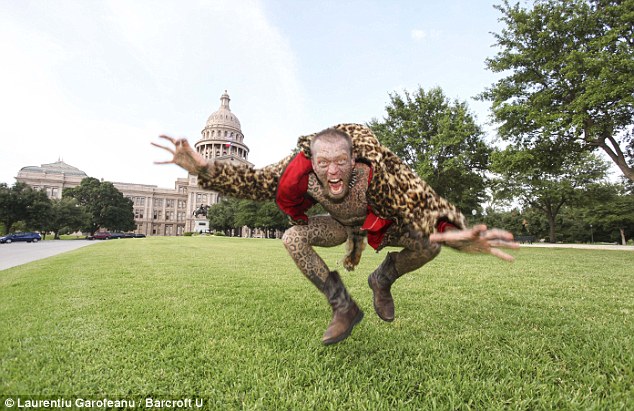 Wild man: Tattoo artist Larry Da Leopard, 40, has covered himself in more than a thousand spots to become half man, half leopard 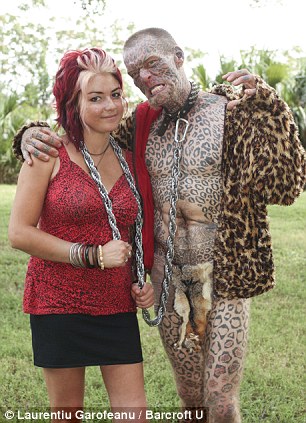 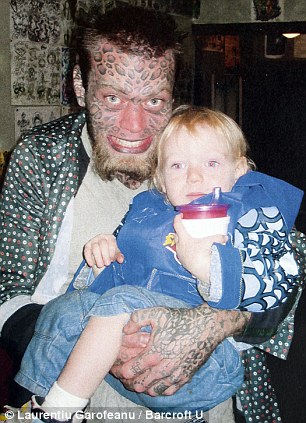 Pride: Larry has been dating hairstylist Julia Ruth (left) on and off for the past seven years, and he has a son named Zoom (right) 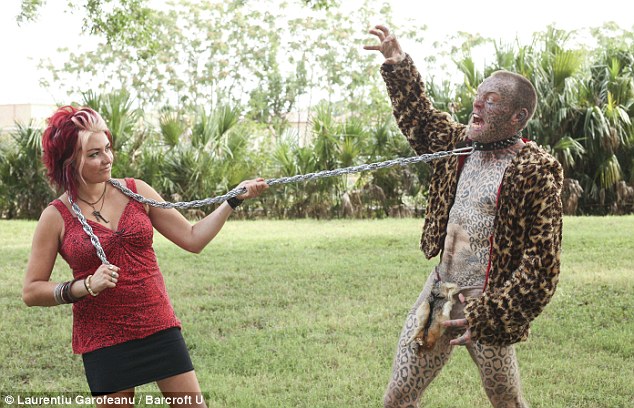 Lovers’ quarrel: Ruth (left) said she sometimes gets annoyed that Larry (right) because he makes himself so readily available to his fans wherever he goes 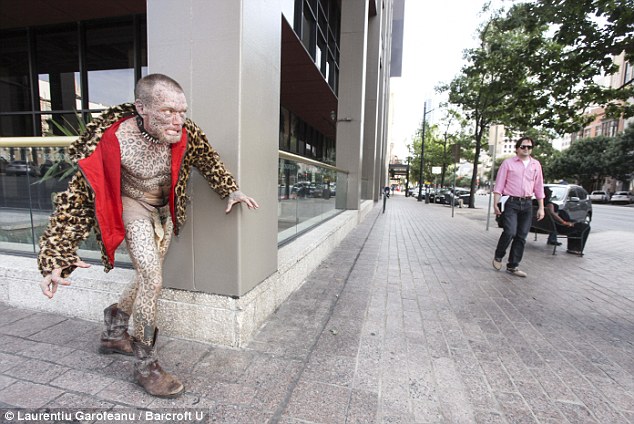 Cat-like reflexes: Larry says his spots have given him special powers, like the ability to see in the dark, run fast and hunt at night

Larry, who refers to himself as a ‘manimal’ – half man, half animal – has no regrets about his choice of body art.

‘My leopard tattoos have given me special leopard powers like seeing in the dark, running really fast and hunting at night,’ he said.

The owner of the Telepathic Tattoo parlor in Austin began getting leopard tattoos at age 20 – a decision borne out of a desire to subvert society’s expectations. Five years later, he inked his face with the distinctive spots.

Larry recalled that when his parents first caught sight of the spots on his body, they wept.

‘My family has a military and Christian background, so they didn’t take to my tattoos very well,’ he said. 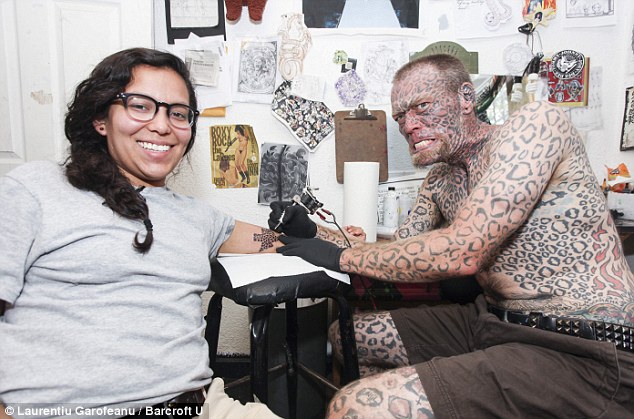 Spot on: Larry has become the go-to tattoo artist for anyone who wants to decorate their body with leopard spots, such as 21-year-old Amy Padilla (left) 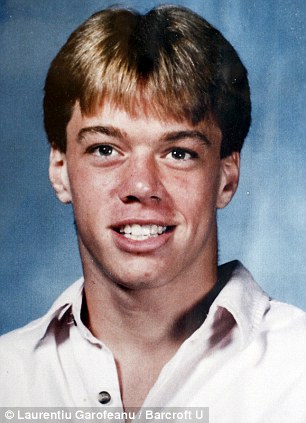 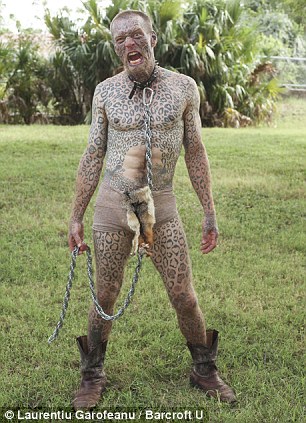 Then and now:  When Larry, born Lance Brieschke, was 20 years old, he began inking his body with leopard spots – a process that culminated five years later with a decision to tattoo his face 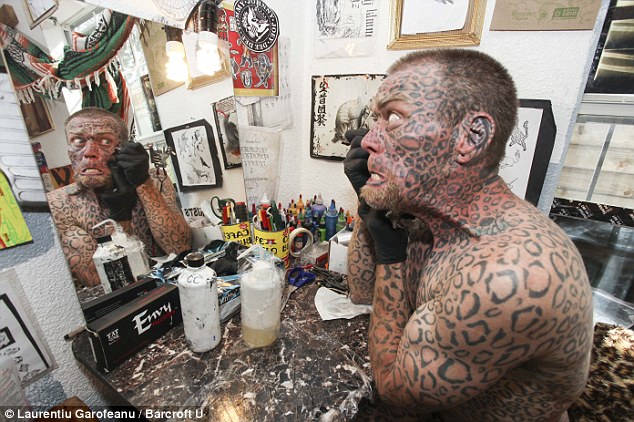 Freshened up: A few times a year, Larry retouches his face tattooes, which tend to fade in the sun

For the next decade, Larry had little contact with his family, feeling hurt that they had failed to embrace his brand of self-expression and shunned him for desecrating his body.

‘It took them ten years to come round but now we’ve got a better relationship,’ he said. ‘They can see I’m doing alright for myself.’ 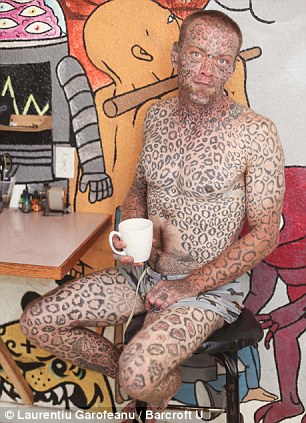 Ouch: In the name of art, Larry made the painful decision to ink his private parts

By his own admission, Larry looks like a ‘cartoon character,’ but that did nothing to stop him from having a fulfilling long-term relationship and even fathering a son, Zoom.

Hairstylist Julia Ruth, 29, who has been dating Larry on and off for seven years, admitted that sometimes she gets annoyed at her wild boyfriend for being so outgoing with his fans.

‘Sometimes I think he’s a little overly friendly and willing to just answer whatever questions,’ she said. ‘If we’re on a date, I want him to set some boundaries.’

But Ruth added that she is never embarrassed to be around the 40-year-old man covered in spots and sporting a loincloth, calling him ‘amusing.’

Not everyone has been as accepting of Larry’s leopard-inspired alter-ego as Ruth: the tattoo artist has been barred from entering diners and even accused of being the devil.

‘I’m proud of my tattoos – few people look like me,’ said the defiant artist. ‘When I look in the mirror in the morning I like what I see.’

In his quest to etch his skin with some 1,000 spots, Larry even made the painful decision to ink his private parts. 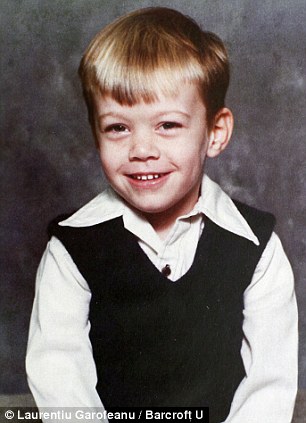 Spotless: Larry, pictured left as a baby and right as a 4-year-old, comes from a military and Christian family, which had initially rejected him when he decided to transform himself into a half-man, half-leopard 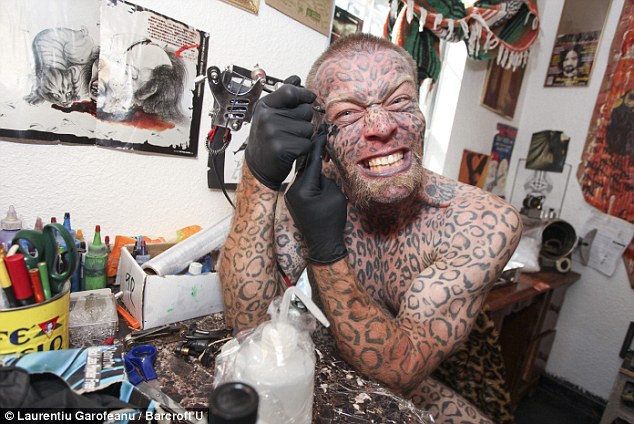 Big plans: Larry plans to get his eyelids inked with spots in the near future

‘I wouldn’t recommend it for everyone,’ he said of the cringe-worthy ordeal. ‘But to me the art is worth the pain.’

A few times a year, he retouches the spots on his face, which tend to fade in the sun. And his work is far from over.

‘I want to get my eyelids tattooed too, but I don’t want to do it myself,’ Larry said. ‘Kind of hard to tattoo your own eyelids.’